Pedernales was a lake tanker, a shallow bottomed tanker, used to transport crude oil from Lake Maracaibo in Venezuela to the refinery on Aruba. It was built in 1938 in Italy, and sailed mainly under the British flag.

During WWII the refinery in San Nicolas on Aruba was the largest in the world. It provided about a third of the aircraft fuel used by the British during the Battle over Britain. The Nazis therefore considered it a target of great importance. They started Operation Neuland in the Dutch Antilles to disrupt shipping and attack the refinery. A part of this operation was the submarine U-156, under the command of Kapitänleutnant Werner Hartenstein.

The U-boat commenced its attack on the morning of Februari 16th 1942. Its first attack was directed at the refinery. The submarine surfaced, aimed and fired its deck gun, only to realize someone had forgotten to remove the waterproof cap from the muzzle, resulting in an explosion that killed one of the sailors and severely wounded another. Still able to use their torpedos, the crew attempted to do as much damage as they could. At 8.01 AM the first torpedo hit the S.S. Pedernales amidships, shortly followed by a hit to its sister ship, S.S. Oranjestad, at 8.03 AM. The Oranjestad sank quickly in waters to deep to dive. The Pedernales, however, drifted untill it ran aground.

Since the Pedernales was hit right in the middle. the bow and stern sections were still functional. Since ships were in short supply during wartime, these sections were salvaged, put together to make a functional ship and sent to Baltimore to get refitted. The midsection is what still remains, laying in 25 feet of water in front of Palm Beach. Do not be fooled by its shallow depth. Pedernales is considered by many to be one of the best dive sites on Aruba for the easy diving and the sheer variety of life. 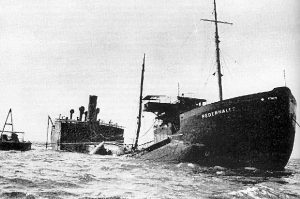