Antilla was constructed in Hamburg and launched 31st of March 1939. Just over a year later she was moored up on the western side of Aruba when Germany invaded The Netherlands on the 10th of May 1940. Aruba being a Dutch colony, the Dutch marines on the island went up to Antilla during the night and demanded her surrender. Refusing to let the gangway down to let the marines on board, the captain forced them to return the next morning. During the course of the night the captain ordered his crew to set the ship ablaze and open the valves, letting seawater into the lower decks. Today she lies on her port side from 15ft/5m under the surface to 55ft/17m at her propeller.

For many years it was possible to see parts of the ship sticking out above the water, but 75 years of salt water haven’t been kind to the metal, collapsing parts of the wreck. This makes for a wreck that changes over the years, making the history rich vessel a very repeatable dive.

Aruban locals call her “The Ghost Ship”, although all sailors were arrested when they jumped off the sinking ship and nobody died. Antilla is 130 mtr/400 ft long, making it one of the biggest wrecks in the Caribbean. 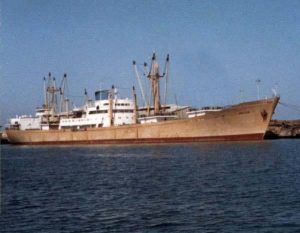 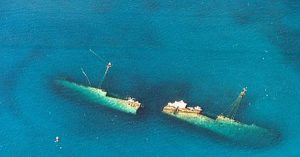